It is all about Violence 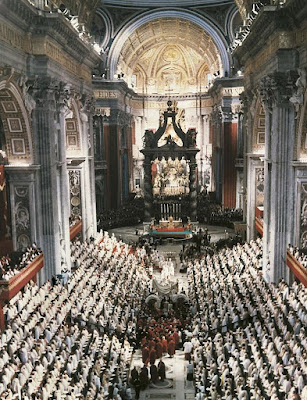 In my post of the other day (here), I reflected on the summary cancellation by the Cardinal Archbishop of Washington, DC, of a Pontifical High Mass long planned for the Vigil of the Assumption on August 14, in the National Shrine. He claimed to do so, exercising his ordinary authority in response to Traditionis custodes, the Pope's motu proprio against the Traditional Latin Mass, ever more frequently now being dubbed the UA (Usus Antiquior). Meantime,  it has become public knowledge that the Cardinal has also rejected the request of the Paulus Institute that he reconsider his action.
In my previous article, I mentioned Ross Douthat's comment in a NYT article, about another author writing in favor of the strategy of TC, who claimed that yet today it should be possible to revolutionize society and the Church on the pattern of the successive stages of the French Revolution. I must agree with Douthat and hold that what happened in 1848 in France to consolidate the supposed gains of the "Reign of Terror" does not represent a universal and cannot simply be applied as described in our historical context, certainly not so many years later and on the world stage. Moreover, who in their right mind would every strive for a revolution like the French one within the Catholic Church? There do not seem to be any Catholic precedents for the use of the guillotine to achieve genuine church reform.
Douthat expressed clear skepticism regarding his colleague's thesis that the present motu proprio, just like in 1848 in France, could accomplish what no amount of violence in the 1970's was able to attain in its attempt to eradicate the timeless liturgical patrimony of the Roman Church. Part of Douthat's argument, at least, was that the hierarchical principle has been so undermined in the last 30-40 years that legislation like Traditionis custodes, apart from its many flaws, is deader in the water than was Veterum sapientia back in 1962.
Notwithstanding Douthat's incisive commentary, the situation is still terribly worrisome for me. This is not a tempest in a teapot. We need but take a closer look on the political side here in the United States at what the radical left seems to be achieving in undermining the family. People are not being convinced or even seduced by the left's dystopic propaganda, no, rather the little ones are being cowed by threats and violence, too often supported by bureaucrats and even elected officials at city, state and federal levels. They are being victimized and things are just being torn down, basta. It is all very sad.
What has brought on this violence today in the Church? It is the same deep-seated hatred of the Apostolic Faith which was at work back in the 1960-70's and which still perdures among an ever diminishing old guard and their clueless recruits. They seem to have imbibed that same hatred, which "wreckovated" churches and burned books and vestments, with no respect for the devotion of a generation now mostly gone to their eternal reward.
This kind of violence cannot be met by counterviolence but rather by the steadfast adherence to the truth and the love of the Old Mass which has captured the love and imagination of not few young people in our own day and time. The revolutionaries, the violent are kicking against the goad, so to speak.
When we were children, one of my mom's ultimate arguments against younger siblings throwing temper tantrums was to tell them to go look at themselves in the mirror and be covered with shame at their ugliness. It was an argument suited to a child, a very simple call to introspection, based on a fundamental conviction concerning the goodness of that child who stood before her stamping his or her little feet. It is a dialogue without much sophistication, but one shot through with love.  At some point the fuming and railing against us and the UA will subside or stop altogether. It has to, for we have a world to claim for Christ. All else is less than to the point.
PROPERANTES ADVENTUM DIEI DEI
Posted by Thomas Gullickson at 1:22 PM